Skip to content
15 Comments on Welcome to Chemistry One-Oh-Twilight-BananaPosted in Health Care, Marriage and Family, Pediatric Mental Illness By AdriennePosted on May 11, 2010July 8, 2010Tagged Bipolar

I’ve been wanting to write an update about Carter, but whenever such an update involves lots of discussion of medications I hesitate. Why? Because psychiatric medications for children is an extremely controversial issue and I have been attacked (verbally and online) and watched friends endure attacks. Most recently, Meg over at Raising Bipolar drew fire from a vocal group of anti-psychiatry activists and sometimes I feel like, if I write about meds, I’m leading with my chin. 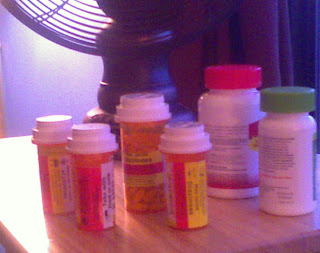 On the other hand, why do I write about Carter? Why do I tell the stories of my family’s struggle and pain? Lots of reasons, and one is because I want to put a face on the hysterical media coverage about parents “drugging” their kids, to show that we are normal families in extraordinary circumstances, just like families with children who have cancer or diabetes. I want people, as many people as possible, to know that responsible, concerned parents have kids who are mentally ill, and some of us choose medicine as one of the ways that we help our kids.

So, all that said, I’m going to try (really, really try) to stop justifying the decisions that Brian and I make with regards to medicines and therapies for Carter. I want to be a woman and mother who has the courage of her convictions, and so maybe, maybe, if I move forward into the world acting as if I am that woman, it will eventually be true.

Two months ago, we knew that risperidone (Risperdal) was not as effective as we’d hoped it would be for moderating Carter’s mood instability and rage so we switched to one of the newer atypical antipsychotics, quetiapine (Seroquel). It worked great, too: his moods were adequately stabilized, he wasn’t as ravenously hungry as on the risperidone, and he even enjoyed a significant decrease in anxiety.

Have you ever been around a hyperactive kid? I’m not talking about an active kid, but one with genuine hyperactivity, where he or she honestly can’t stop moving climbing running talking spinning yelling. Think of that hyperactive kid, then put her or him in a room with a dozen other kids who are also very hyper (in your mind, for goodness’ sake; we don’t want to create a cosmic event by doing this in reality). Now melt them all into one child, add a dash of red chili powder, and wind him up tight. That’s what quetiapine did to Carter. Since most people who take quetiapine find it extremely sedating, this was more than a little surprising.

Carter was experiencing a side effect called akathisia, an indescribably awful feeling of restlessness. It’s typically accompanied by feelings of acute anxiety and dysphoria, but Carter didn’t have that which probably explains why it took us as long as it did to identify it. During the weeks he was on quetiapine, Carter was shockingly destructive (not because of anger but because he could not slow his body down), required more sleep meds than usual, and you know how people say, “I can’t take you anywhere!”? I actually couldn’t take him anywhere. I was afraid to take him to see Grammy for fear he’d break her, and I couldn’t take him to stores because there’s no way I can afford to pay for all the things he might have broken.

In the meantime, Carter’s teachers greeted me at the end of every day looking like the proverbial deer in the headlights. Carter’s psychologist and behavioral management specialist were both stunned by his level of hyperactivity. It was breathtaking. Truly.

The next atypical antipsychotic in line after quetiapine is aripiprazole (Abilify), but that drug was out of consideration from the start. His significant akathisia from quetiapine, plus the fact that I had an akathasia reaction to Aripiprazole several years ago, meant that the likelihood of a similar reaction was high.

Does this sound like a complex, frustrating dance in which Carter, Carter’s illness, the meds, the psychiatrist, and Brian and I are engaged? That’s exactly how it feels.

We took Carter off the quetiapine and put him back on the risperidone. Since that drug in combination with oxcarbazepine (Trileptal), the mood stabilizer he’s been taking for about a year, has not been adequate, we needed to change to one that’s more robust. Enter lithium.

That’s about where we are now. Carter has been off quetiapine for nine days and he’s back to his typical level of hyperactivity, which right now seems downright sedate. He’s started the lithium, but we won’t start to wean from the oxcarbazepine until he reaches a therapeutic level of lithium in his blood. As much as we hate to have him on so many medications at one time, changing too many meds too fast creates a risk of him becoming suddenly unstable. We are constantly trying to minimize the risks of these high-powered medicines while also minimizing the risks of this high-powered illness. 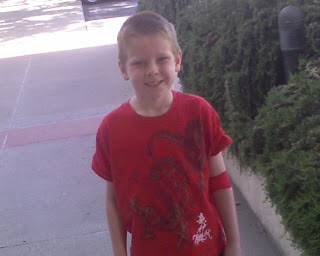 Even though lithium is one of the oldest and most effective of psychiatric medications, it’s not usually a first-line drug. It requires close monitoring (all psychiatric medications do, of course; lithium requires extra) because too little lithium is useless, and too much is very dangerous. People being treated with lithium require regular blood tests, something that doesn’t especially impress Carter. He had his first lithium level drawn this morning and while he did great, it’s not something he and I look forward to doing every few months for the foreseeable future. Of course, I’ll do whatever I need to do to keep him safe (including getting him some EMLA cream to make the draws easier), but I don’t have to like it! We also have to be careful to keep him well hydrated as dehydration increases lithium concentration and can cause lithium toxicity.

I made it through college chemistry by the skin of my teeth, which just goes to show that you can learn anything if you need the knowledge bad enough. Here’s hoping this is the last med change Carter has to endure for awhile. He deserves a nice, long period of stability. I want nothing, absolutely nothing in the whole world as much as I want that.

If you enjoyed this post, make sure you subscribe to my RSS feed!
Welcome to Chemistry One-Oh-Twilight-Banana

15 thoughts on “Welcome to Chemistry One-Oh-Twilight-Banana”

This site uses Akismet to reduce spam. Learn how your comment data is processed.

People who equate truth with fact are missing the point.